COULD THE TWO ANGELS, GABRIEL & MICHAEL, BE THE TWO WITNESSES? 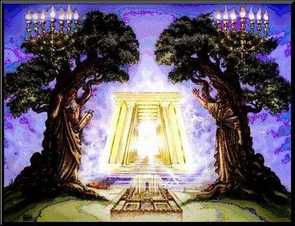 We know that the Lord can empower anyone at anytime to do anything – but how many humans qualify to be called "anointed and stand before and beside God?"

By the time Zechariah wrote this, Enoch, Moses and Elijah had already lived. Could it be that "two humans" are so special that they could qualify to be spoken of as “two anointed ones, who stand beside the Lord of the whole earth?”

Consider not only where these two stand, but the “anointing of God” flows through them.


And it says these "two prophets tormented the whole earth."


How many prophets in the Bible ever qualified for a “global ministry” and that could torment the whole earth for 3 ½ years?

How many prophets could qualify for the following?


The Lord could give these powers to anyone He chooses. But how many humans did He ever empower this way so far that we know of?

Could it be that that two high ranking angels of heaven, will take a human form and only when their testimony is finished, their human form is allowed to be killed?


When the one on earth was built, the Lord ordered Moses to put one angel on each side of it.


From the latter part of this section of Scripture, it also came to be called the Ark of His Presence. The Lord could have just had them make an “ark” without angels and yet He has them put two there. Maybe in heaven, these represent two angels stand before Him, one on His left and one on His right...

Let's take another look at the two most famous angels known to Christians by name from the Bible.

From the following verse we see Satan and Michael disputed over the possession of Moses' body when he died.


Michael at some point, either helped (or will help) play an integral part of Satan being removed from heaven.

And lastly Daniel recorded this when writing about the demise of the last king of the north, the Antichrist...

Gabriel was sent to Zacharias, John the Baptist's father.


Gabriel was sent to Mary.


Who was directing Gabriel? Personally, I believe it was the Angel of the Lord, which is the pre-incarnate Christ. All through history, when this “Angel” is seen, He has done things that only Christ could do or had the right to do. Who else has the right to swear by heaven and earth? Or could have been the captain of the Lord's army as Joshua encountered? Or the Angel who said “I am” that the Lord spoke through at the burning bush to Moses...


And this following last section of verses, are of personal opinion for sure in that while it does not "name names," it certainly seems to be the Lord Jesus having come as the Angel of the Lord to Daniel and the same two angels that had been with Daniel previously, the one who fought his way there to speak to Daniel, Gabriel, with the help of the other angel, Michael.


Could it be that "Gabriel, Michael and the Lord" were with Daniel to “impart prophecy” that would “relate to the latter times,” including the reign of the king of the North, aka the 11th horn, aka the mouth of the 4th beast, aka the beast, aka the Antichrist... whose “time” will clash with the ministry time of the “Two Anointed Ones of God, who will stand for the testimony of Jesus Christ and speak for God as His Witnesses for 3 and ½ years?

If it is so, then "the human forms" the angels take will be "what is killed and raised back up" in 3 and ½ days...

Many would want to kill these Two Witnesses of God, as they will “torment so many” but how could they sleep or survive without being taken or killed before their "time," if there will not be something extremely supernatural helping them?

For now, this article is “just a thought or thoughts” on the Two Witnesses being the angels, Gabriel and Michael, but it sure seems amazingly possible!

OTHER ARTICLES ABOUT THE TWO WITNESSES

ARTICLES IN THE ANTICHRIST CATEGORY

ABOMINATION OF DESOLATION BIBLE VERSES
A compilation for thought and study.
ANTICHRIST AND FALSE PROPHET BIBLE VERSES
Bible verses about the Antichrist and false prophet gathered together for thought and meditation.
ANTICHRIST REVEALED IN THREE PROPHETIC SECTIONS OF SCRIPTURE
This article shows a prophetic thread about the same Antichrist in Daniel 7, Daniel 8 and Revelation 17 and in so doing shows more of who he really was and is.
SATAN IS NOT THE ANTICHRIST
This articles shows that Satan is not the Antichrist, quickly & clearly with Scripture.
THE ANTICHRIST, HIS IDENTITY AND NAME
The Bible reveals much about him. This article explains Revelation 17 and links it with Daniel and how the Bible reveals even his name.
THE DRAGON AND THE BEASTS WITH 7 HEADS AND 10 HORNS
It is possible that the dragon of Revelation 12, the beasts of Revelation 13 and 17, as well as the four beasts of Daniel chapter 7, are the same in some manner.
THE SCARLET BEAST AND THE MYSTERY, BABYLON THE GREAT, THE MOTHER OF HARLOTS AND OF THE ABOMINATIONS OF THE EARTH
Scripture with commentary showing much about who the beast is and its relationship with Babylon, the harlot, as well as, who she really is.
THE SECOND BEAST: THE FALSE PROPHET
This article takes a serious look at the identity and works of the second beast, the false prophet, according to Scripture.
THE TWO FINAL BATTLES BETWEEN GOD & SATAN
See the biblical truth that Armageddon happens at the end of the 7 years and the battle of Gog and Magog at the end of the Millennium.
TWO WHITE HORSES, TWO VERY DIFFERENT RIDERS AND TIMES
The Bible shows that the Antichrist is the allegorical rider of the white horse at first seal. Jesus Christ is the rider of the white horse at Armageddon.
WHAT IS THE ABOMINATION OF DESOLATION?
This is a clear and definitive look at what the Bible says about it.
WHO IS THE ANTICHRIST, THE SON OF PERDITION?
This shows how the Antichrist is both a false Messiah and against Jesus Christ at the same time, according to the Bible.
WILL THE NEW JEWISH MESSIAH BE THE ANTICHRIST OF THE CHRISTIANS?
Understanding how it is possible and the reality of it.