THE SEVEN BOWLS OF GOD'S WRATH 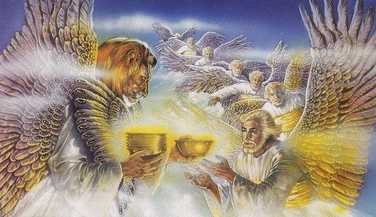 The seven bowls of God's wrath come from seven angels, who come from the tabernacle of testimony in heaven. This is the place of two important things. One, the mercy seat that the blood of Jesus was applied to in heaven which would not be covering those on earth during this time as they all will have heard the Gospel and rejected it. People will have taken the mark of the beast and worshiped his image or have been killed. Secondly, inside the Ark of the Covenant, would be the Law. These seven angels are coming to deliver seven plagues and seven bowls of the wrath of God."

The Seven Bowls of God's Wrath, with commentary.

Seven angels come from "the tabernacle of the testimony" of heaven, the location of the Ark of the Covenant & Mercy Seat (in the earthly Jewish temple, this would be the Most Holy Place, inside the Ark would be the Torah (The Law) and upon the top of it, is the Mercy Seat where the blood would be applied). These seven angels have seven plagues to dispense and no one can enter the temple until these plagues are finished. One of the four living creatures gives them their bowls full of the wrath of God. They have the plagues and bowls of the wrath of God.

Bowl 1 / Revelation 16:2 "So the first went and poured out his bowl upon the earth, and a foul and loathsome sore came upon the men who had the mark of the beast and those who worshiped his image."

The 1st angel will pour his bowl upon the earth. All who will have received the mark of the beast & those who will have worshiped his image, will receive foul & loathsome sores.

Bowl 2 / Revelation 16:3 "Then the second angel poured out his bowl on the sea, and it became blood as of a dead man; and every living creature in the sea died."

The 2nd angel will pour his bowl upon the sea became as of a dead man's blood (coagulated) & every living creature in the sea will die. The Amplified Version says: "... the sea, and it turned into blood like that of a corpse [thick, corrupt, ill-smelling, and disgusting], and every living thing that was in the sea perished."

Bowl 3 / Revelation 16: 4-6 "Then the third angel poured out his bowl﻿ on the rivers and springs of water, and they became blood. And I heard the angel of the waters saying: "You are righteous, O Lord, the One who is and who was and who is to be, because You have judged these things. For they have shed the blood of saints and prophets, and You have given them blood to drink. For it is their just due."

The 3rd angel will pour his bowl upon the rivers and springs and turn them into blood. The angels declare it is their just due for killing the saints and prophets. Retribution.

Bowl 4 / Revelation 16:8-9 "Then the fourth angel poured out his bowl on the sun, and power was given to him to scorch men with fire. And men were scorched with great heat, and they blasphemed the name of God who has power over these plagues; and they did not repent and give Him glory."

The 4th angel will pour his bowl on the sun and mankind literally gets scorched with tremendous heat. Also, this is confirmation, the day of salvation is over; they only blaspheme God now. No one gets saved without being chosen and led by the Holy Spirit and the day of salvation has past.

Bowl 5 / Revelation 16:10-11 "Then the fifth angel poured out his bowl on the throne of the beast, and his kingdom became full of darkness; and they gnawed their tongues because of the pain. They blasphemed the God of heaven because of their pains and their sores, and did not repent of their deeds."

The 5th angel will pour his bowl on throne of the beast and his kingdom will become full of darkness. People will gnaw their tongues in pain and they will blaspheme God and still not repent.

Bowl 6 / Revelation 16:12 "Then the sixth angel poured out his bowl on the great river Euphrates, and its water was dried up, so that the way of the kings from the east might be prepared."

The 6th angel will pour his bowl on Euphrates River and it will be drying up, making the way for the kings of the East' preparations.
﻿
The enemy has to make ready for Armageddon:


The evil ones will prepare for their last stand of this age whereupon they lose at the Battle of Armageddon. Thought for consideration: Why did Jesus at this point and time, have it inserted here about His coming? The writer of this article believes, it is there to warn all who read it to: Stay right with God. You won't want to be on the bad side. Keep your garments clean and your sins covered (by Christ). Those who do not, will wind up under God's judgment and wrath.﻿

Bowl 7 / Revelation 16:17 "Then the seventh angel poured out his bowl into the air, and a loud voice came out of the temple of heaven, from the throne, saying, "It is done!"


In this last section of Scripture, when John writes "It is done!" - It really is done. But I believe John was not done. He starts in verse 18, describing some about the demise of Babylon. This is another "interruption or break" in some sense. Other men besides John put chapter and verse markings that seemed right to them. We need discernment to follow John, please consider it and see what holds out to make sense and come together. If all the bowls are done and a voice from heaven declares "It is done" then it is done. But the verses about the demise of Babylon have to apply to an earlier time. Babylon has to be destroyed at or near the rapture because the a voice from heaven says, "Come out of her, my people, lest you share in her sins, and lest you receive of her plagues. For her sins have reached to heaven, and God has remembered her iniquities." (Revelation 18:4b-5). "My people" have to be Christians (perhaps from interment camps) or some of the 144,000 Jews that will be sealed at that time too. But there should be no people of God in Babylon after the rapture and the sealing of the 144,000.

There are more verses in other areas about Armageddon. It seems right to put these here:


This is very real and very serious. The time to be saved is today. The time to see loved ones saved is today. Not only will a person need to be saved to make it through the intense tribulation that happens during the first three and one half years before the rapture, but a person will need to know their Bible in order to recognize all the deception that will be rampant. All believers will need to be close to the Lord to have the strength to endure. How many times, does the Bible say beware of false teachers and prophets? The only way to recognize them is by knowing the truth of God's Word for oneself.

To the writer of this article, this is the end of 6000 years of mankind living in a fallen world. In the very next verse, which happens to be in another chapter (Revelation 20:1), Satan himself, is bound and cast into a pit thousand years. There are still 1000 years of millennial reign of Christ to come on a recovered earth and then Satan will be released for a season of testing for those born during that time. But when his short season is over, its over. He will be put away forever. Did I say forever? Yes, forever! And there will be a new heaven and a new earth (old universe and earth destroyed) and sin will be no more. No more fallen natures to deal with and no more devil or demons. A clean and wonderful eternity with our wonderful God and we to be His joy as His people. Now this is a happy ending (and beginning).

OTHER ARTICLES ABOUT THE "SEVENS" OF THE BOOK OF REVELATION

BIBLE VERSES OF ALL THE "SEVENS" OF THE BOOK OF REVELATION
Listed for the person wondering how many "sevens" there are in the book of Revelation.
﻿SEVEN TRUMPETS, SEVEN BOWLS PARALLEL STUDY
A side by side view of the 7 trumpets and 7 bowls for the person seriously studying the book of Revelation.
THE SEVEN SEALS OF REVELATION
The seven seals listed with commentary showing corresponding Scripture & a chart.
THE SEVEN TRUMPETS AND THREE WOES
The 7 trumpets are shown with light commentary & how the last 3 trumpets are also the 3 woes.
THE HOLY INTERRUPTION
John was interrupted during the recording of the seven trumpets and three woes.

ANCIENT JEWISH WEDDING CUSTOMS & JESUS CHRIST, HIS BRIDE THE CHURCH
Amazing correlations such as, only the Father of the groom could say "call the wedding" when he felt all were prepared according to him and more. Shows a distinct correlation ancient Jewish wedding customs with the rapture.
AS A THIEF IN THE NIGHT
Understanding this idiom, its real meaning and how it correlates with other Scripture!
AS IN THE DAYS OF NOAH
What did Jesus really mean by this? It is much more than the common interpretation.
CAN THE RAPTURE HAPPEN AT ANY TIME?
What prophecies still need to be fulfilled before the rapture can happen?
EVERY EYE WILL SEE HIM
Jesus is coming for His bride. And He is not eloping. The rapture is so much bigger (and the events that surround it) than we can even know. It will be visible and a huge event.
EVERY KNEE WILL BOW
The lost will bow to the Lord Jesus. The Father will see His Son glorified; whether they like it or not. And they will confess that Jesus is Lord.
IMPORTANT COMPONENTS TO THE BOOK OF REVELATION
An overview of some of the major components of the book of Revelation.
IMPORTANT CONSIDERATION FOR REVELATION UNDERSTANDING
A few keys are offered here that can unlock some of the doors to understanding prophetic Scripture.
IN THE TWINKLING OF AN EYE
This is about one of the most misquoted verses of all time. If you have not seen it yet, once you see the real meaning, it is amazing.
THE BIGGER PICTURE, UNDERSTANDING GOD AND THE DEVIL IN THIS DAY & HOUR
A timely commentary for living during these days.
THE LAST TRUMPET
There are many trumpets in the Bible. There are 7 special ones foretold of by John the Revelator. But which one happens at the rapture?
THE LORD WILL RULE WITH A ROD OF IRON
This article explains the real meaning of the verses that make this statement.
THE OPPORTUNITY FOR SALVATION WILL END AT THE RAPTURE
Sadly many think they have their whole lives to decide to turn to God and for some it turns out to have been a foolish mistake. And so it is with the rapture.
THE TWO FINAL BATTLES BETWEEN GOD & SATAN
See it shown with Scripture, that Armageddon happens at the end of the 7 years and the battle of Gog and Magog at the end of the Millennium.
TWO WHITE HORSES, TWO VERY DIFFERENT RIDERS AND TIMES
The Antichrist is the allegorical rider of the white horse at first seal. Jesus Christ is the rider of the white horse at Armageddon.