THE TRIBULATION & THE WRATH OF GOD

It is conceivable that to be on the receiving end of God's wrath is tribulation. However, in no way is “tribulation” only or always a result of God's wrath. The biblical definition of “tribulation” according to Strong’s comes from the word “thlipsis” and means pressured, afflicted (-tion), anguish, burdened, persecution, tribulation or trouble. “Tribulation” is not restricted to believers or non-believers. However, God’s wrath really is for the “sons of disobedience” (non-believers).

For anyone to say that this “last week of years” is “completely a time of God's wrath” is erroneous. It is beyond the shadow of doubt that these 7 years are divided into two vastly different segments. The 1st half will have Christians present and living through great tribulation just as Jesus foretold, followed by the rapture. The 2nd half will be when God's wrath will be poured out upon the wicked, just as John foretold of in the book of Revelation. This will be clearly shown. Seven years minus the terms of Antichrist and Two Witnesses, which are both for 42 months (3½ years), leaves a remainder of 3 ½ years left for the trumpets and bowls of Gods wrath and will conclude with the Battle of Armageddon.

Let's look at what the Bible has to say. First, the two points most of us agree on:

From Daniel 9:24-27, we know Father God has these “last 7 years” set aside. For a breakdown of this prophecy, see the message: The Mystery Of Daniel's Seventy Weeks of Years.

2. God's wrath is not for His children.


So does this mean that Christians never suffer?

Not at all, in fact, all true Christians face some measure of suffering and persecution for their faith.


Jesus, the Son of God Himself, was falsely accused, viciously beaten and crucified. Paul the apostle said of himself being: “in labors more abundant, in stripes above measure, in prisons more frequently, in deaths often. From the Jews five times I received forty stripes minus one. Three times I was beaten with rods; once I was stoned; three times I was shipwrecked; a night and a day I have been in the deep; in journeys often, in perils of waters, in perils of robbers, in perils of my own countrymen, in perils of the Gentiles, in perils in the city, in perils in the wilderness, in perils in the sea, in perils among false brethren; in weariness and toil, in sleeplessness often, in hunger and thirst, in fastings often, in cold and nakedness” (2 Corinthians 11:23b-27). The disciple James, was one of the first martyrs of the early church; additionally, the apostle Stephen, was also an early martyr who was stoned to death. Almost all of the first eleven true disciples were killed for their faith. From the very beginning, Christians have suffered and died for the love and name of Jesus. Christians have been tortured, imprisoned, enslaved, persecuted, burned alive, fed to lions and alligators, boiled, beheaded and even crucified.

So, while Christians are saved from the wrath of God, thanks to Jesus taking our place at Calvary, there are times when Christians suffer and are persecuted, even to death for their faith.

What else do we know for certain about this last 7 years, according to God's Word?

﻿We know there are certain elements of this time period that must be fulfilled and in God's order. The Lord gives us information in various places but it is our job to learn whatever He has to reveal to us.

Here are some facts:

The very first seal of the 7 seals, reveals that the Antichrist is “given” a bow, a crown representing authority and instructions to conquer.


What will the evil one do with his authority? He will blaspheme God and everything about Him. The enemy will go out conquering globally.


The Antichrist will also make war with the saints and eventually overcome us. This process will take 42 months. While the enemy will be allowed his time, it will not be without the presence of God’s two anointed ones.


Not only will the Two Witnesses be raised from the dead after 3 ½ days, but they will be called up to heaven. It is at this time, that the rapture will also happen.

At the 5th seal, everyone will be forced to worship the beast or be sought out to be killed just prior to the rapture. The presence of the Two Witnesses will be restraining the enemy to some measure but once they are killed, the most intense tribulation will begin. Only by the grace of God could anyone escape and except the Lord shorten the time, none would make it.


How do we know what happens to the lost after the rapture?

Those that will worship the beast and his image and take his mark will have to drink the wine of the wrath of God which is poured out full strength into the cup of His indignation.

Four angels will be held back while the Lord seals the 144,000 Jews.


All 7 seals are for the first half of the 7 years and conclude at the rapture in the middle or middle plus 3 ½ days.

The first seal is the beginning of the rise of the Antichrist when he is given his authority (Revelation 6:1-2), followed by 6 more. The last 2 seals are the rapture. So by this we can be sure that the seven seals are for the first 3½ years ending with the 7th being the rapture (Revelation 8:1).

The 5th seal pertains to the martyrdom of Christians.


The silence in heaven will happen when the Lord, along with His angels and those in heaven already, come for the rapture. However it will get very loud when Jesus returns to heaven with all the angels and saints!


There are verses Matthew, Mark and Luke that are totally harmonious with the 6th and 7th seals being the rapture. The 6th seal will be the atmosphere of the earth giving way to the Lord coming in His glory and the 7th seal will be silence in heaven because of all that happens at the rapture.


How do the 7 trumpets and 7 bowls of God's judgment and wrath relate to the 7 years?

The 7 trumpets and 7 bowls start after the rapture.


The plagues of judgment that will follow the trumpets sounding are as follows: At the 1st trumpet, hail and fire mingled with blood are cast upon the earth resulting in 1/3rd of the trees and all grass being burned up. At the 2nd trumpet, something like a great mountain of fire will be cast down into the sea and 1/3rd of the seas will become like blood, 1/3rd of the living creatures of the seas will die, and the destruction of 1/3rd of all ships. At the 3rd trumpet, a great star called Wormwood will be cast upon 1/3rd of the rivers and the springs of water which will result in 1/3rd of the earth’s water becoming like bitter, wormwood and the deaths of many. At the 4th trumpet, the sun, moon and stars will be struck with darkness bringing 1/3rd less light to the day and night. At the 5th trumpet, demons like locusts will be loosed out of the bottomless pit to sting and torture people for 5 months but no one will be able to die yet. At the 6th trumpet, 4 special angels will be loosed to empower a 200 million man army to wipe out 1/3rd of mankind. And lastly, at the 7th trumpet, the lost will meet their final destruction (condensed from Revelation 8, 9 and 11).

The 7 bowls are called “the bowls of the wrath of God.”


The plagues from the bowls being poured out, are as follows: With the 1st bowl, foul and loathsome sores will come upon everyone who will have taken the mark of the beast and those who will have worshiped his image. With the 2nd bowl, the seas will turn to coagulated blood and all the living creatures of the sea will die. The 3rd bowl will completely affect all rivers and springs by turning them to blood for retribution of the blood they shed. With the 4th bowl, an angel will pour his bowl on the sun and men will literally get scorched with tremendous heat. The 5th bowl will be poured upon the beast's throne and kingdom, and darkness will come. People will be in so much pain that they will gnaw their tongues. The 6th bowl will cause what is left of the Euphrates river to dry up and help make the way for the kings from the east to go to Armageddon and lastly, with the 7th bowl all will be completed, including the judgment of the wicked.

While we do not have all the answers, the basics are clear as you can see by the chart below and you can read more about in detail of the various aspects on this website. Even if one were to still consider the last 7 years of this age, all tribulation, it would be closer to being correct than to say it is 7 years of wrath. The Lord's wrath really is for the wicked only and will only come upon them, after His children are raptured up and the 144,000 Jews are sealed. At the conclusion of the Battle of Armageddon, all of the evil people who are still left alive, will be eradicated (Revelation 14:17-20, 19:21). All that has been prophesied of by the Lord (what we do and do not understand) will happen. 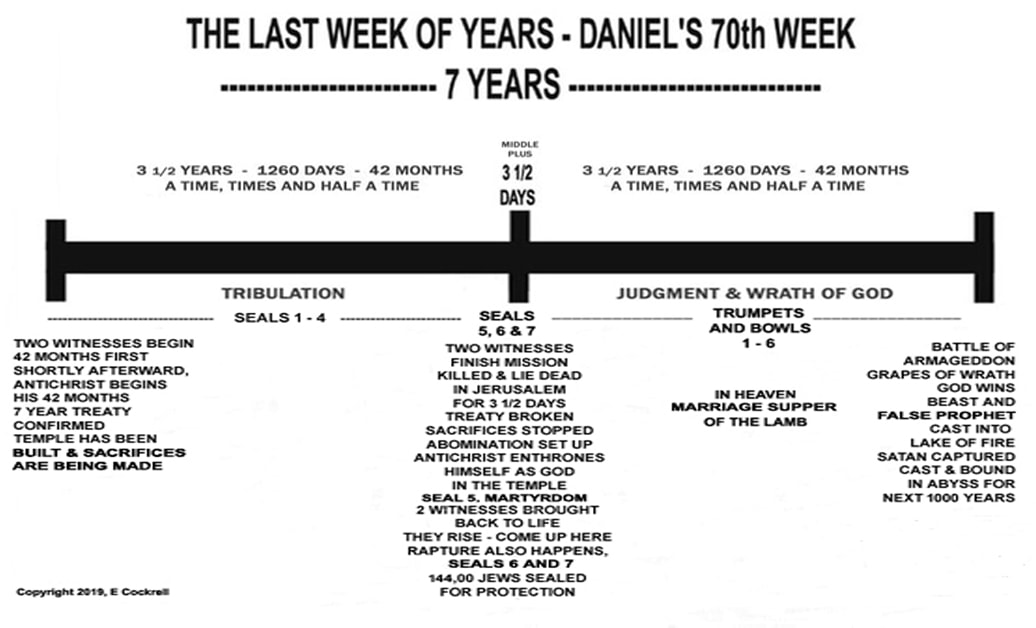 Closing thoughts help expose pre-tribulationism: If the rapture would happen at the beginning of the 7 years and the Holy Spirit be removed and people continue to be saved as pre-trib purports, then how can they explain people being saved without the conviction and leadership of the Holy Spirit and then being alive while God’s wrath is being poured out? Answer: Bad theology does not hold water. And the rapture will happen in the middle, preceded by 3 ½ years of tribulation and followed by 3 ½ years of God’s wrath.
OTHER ARTICLES ABOUT BASIC RAPTURE CONCEPTS

WHAT IS THE RAPTURE?
A scriptural introduction to understanding the rapture concept.
IS THE WORD "RAPTURE" IN THE BIBLE?
Understanding "harpázō" and the Bible verses ​where it is used.
THE MYSTERY OF DANIEL'S SEVENTY WEEKS OF YEARS
There is "one week of years" left on the "prophetic clock." This "last seven years" (sometimes called the tribulation) was foretold of in the book of Daniel.
TRIBULATION AND WRATH, BIBLICAL DEFINITIONS AND USAGE
Understanding the biblical usage of these words in their original context.
UNDERSTANDING THE RAPTURE AND VARIOUS VIEWS ABOUT IT
Pre, mid and post tribulation definitions, understanding the millennial views, preterism and more.
THE BEST BIBLICAL MINDSET FOR LIVING IN THE LAST DAYS
As Paul showed the Thessalonian church, there is a biblical mindset to have regarding living in the last days.

​
Copyright © 2014, revised, E. Cockrell, © Sep 2016, May be copied for personal study or instruction but shall not be copied and/or distributed in whole or part without permission or for financial profit.