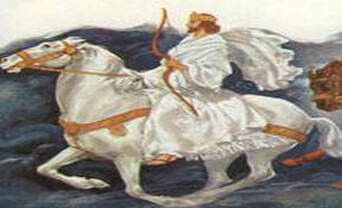 THE ANTICHRIST IS GIVEN A WHITE HORSE

Jesus, the only One who is worthy to open Scroll with the seven seals, and the four living creatures command John to watch as these four go and fulfill their assignments. There are four horses with riders, who are the first four of the seven seals (of first ½ of the tribulation) - (the white horse is the first one of the seven seals).


This horse & rider represent the Antichrist & the authority given to him to conquer at the beginning of the tribulation.

The horse is "white" because he is "imitating good." The crown was given to him. He did not earn it. He, with bow in hand, goes out to conquer and to continue to conquer. He represents "given authority, allowed deception and being allowed to conquer."

Read & see leading up to the Battle of Armageddon. First there is the Marriage Supper of the Lamb. Afterward, heaven opens & Jesus comes forth with His white horse.


The "Marriage Supper of the Lamb" takes place during the last half of the seven years.

Jesus Christ getting ready for Armageddon (with the armies of heaven on white horses also).


Note that no one had to give Jesus His crowns (unlike the Antichrist of the first horse who was given everything to fulfill his assignment). The Lord's crowns were and are His. He was not "given" His horse or His authority, power or His armies. All was and all is: His.


Conclusion of the Battle of Armageddon


This is clearly – Armageddon & the “end of the age.” The Lord has fire in His eyes and a sword in His mouth. His Word will accomplish all. He treads a winepress of the fierceness & wrath of God. Now He rules with a rod of iron. (the rod of iron is for the humans and evil ones still on the earth; not the saints in heaven)

In closing: Jesus has warned us not to be deceived as shown in the Gospels, and by way of the the books of Daniel, Thessalonians & Revelation. He said the deception would be great and many would fall. We must be grounded in the Word of God and know that when a global hero comes on the scene, seeming to be greater than human and doing amazing things, we must realize who he is and not get drawn into his lies.
OTHER ARTICLES IN THE THE ANTICHRIST CATEGORY

ABOMINATION OF DESOLATION BIBLE VERSES
A compilation for thought and study.
ANTICHRIST & FALSE PROPHET BIBLE VERSES
The Bible verses about the Antichrist and false prophet gathered together for thought and meditation.
ANTICHRIST REVEALED IN THREE PROPHETIC SECTIONS OF SCRIPTURE
This article shows a prophetic thread about the same antichrist in Daniel 7, Daniel 8 and Revelation 17 and in so doing shows more of who he really was and is.
SATAN IS NOT THE ANTICHRIST
This articles shows it quickly & clearly with Scripture.
THE ANTICHRIST, HIS IDENTITY AND NAME
The Bible reveals much about the Antichrist. This article explains Revelation 17 and links it with Daniel and how the Bible reveals even his name.
THE DRAGON AND THE BEASTS WITH 7 HEADS AND 10 HORNS
It is possible that the dragon of Revelation 12, the beasts of Revelation 13 and 17, as well as the four beasts of Daniel chapter 7, are the same in some manner.
THE SCARLET BEAST AND THE MYSTERY, BABYLON THE GREAT, THE MOTHER OF HARLOTS AND OF THE ABOMINATIONS OF THE EARTH
Scripture with commentary showing much about who the beast is and its relationship with Babylon, the harlot, as well as, who she really is.
THE SECOND BEAST: THE FALSE PROPHET
This article takes a serious look at the identity and works of the second beast, the false prophet, according to Scripture.
THE TWO FINAL BATTLES BETWEEN GOD & SATAN
See the biblical truth that Armageddon happens at the end of the 7 years and the battle of Gog and Magog at the end of the Millennium.
WHAT IS THE ABOMINATION OF DESOLATION?
This is a clear and definitive look at what the Bible says about it.
WHO IS ABLE TO MAKE WAR WITH THE ONE WHO HAD THE DEADLY WOUND AND STILL LIVED?
Taking a closer look at the deceiver, the first beast who will deceive the world.
WHO IS THE ANTICHRIST, THE SON OF PERDITION?
This shows how the Antichrist is both a false Messiah and against Jesus Christ at the same time, according to the Bible.
WILL THE NEW JEWISH MESSIAH BE THE ANTICHRIST OF THE CHRISTIANS?
Understanding how it is possible and the reality of it.

﻿ANCIENT JEWISH WEDDING CUSTOMS & JESUS CHRIST, HIS BRIDE THE CHURCH
Amazing correlation such as, only the father of the groom could say "go, call the wedding" when he felt all were prepared according to him and more.
AS A THIEF IN THE NIGHT
Understanding this idiom, its real meaning and how it correlates with other Scripture!
AS IN THE DAYS OF NOAH
What did Jesus really mean by this? It is much more than the common interpretation.
CAN THE RAPTURE HAPPEN AT ANY TIME?
When all the events line up according to prophecy, the rapture will happen. So what is left that is necessary for the Word of God to be fulfilled?
EVERY EYE WILL SEE HIM
Jesus is coming for His bride. And He is not eloping. The rapture is so much bigger (and the events that surround it) than we can even know. It will be a huge event.
EVERY KNEE WILL BOW
The lost will bow to the Lord Jesus. The Father will see His Son glorified; whether they like it or not. And they will confess He is Lord.
IMPORTANT COMPONENTS TO THE BOOK OF REVELATION
An overview of some of the major components of the book of Revelation.
IMPORTANT CONSIDERATION FOR REVELATION UNDERSTANDING
A few keys are offered here that can unlock some of the doors to understanding prophetic Scripture.
IN THE TWINKLING OF AN EYE
This is about one of the most misquoted verses of all time. If you have not seen it yet, once you see the real meaning, it is amazing.
THE APOSTASY, THE GREAT FALLING AWAY
Many are looking for "the whole world to come to Christ" before the Lord returns. The opposite will happen. See it in God's Word and explained here.
THE BIGGER PICTURE, UNDERSTANDING GOD AND THE DEVIL IN THIS DAY AND HOUR
A timely commentary for living during these days.
THE LAST TRUMPET
There are many trumpets in ​the Bible. There are 7 special ones foretold of by John the Revelator. But which one happens at the rapture?
THE LORD WILL RULE WITH A ROD OF IRON
This article explains the real meaning of the verses that make this statement.
THE OPPORTUNITY FOR SALVATION WILL END AT THE RAPTURE
Sadly many think they have their whole lives to decide to turn to God and for some it turns out to have been a foolish mistake. And so it is with the rapture.
THE TWO FINAL BATTLES BETWEEN GOD & SATAN
See it shown with Scripture, that Armageddon happens at the end of the 7 years and the battle of Gog and Magog at the end of the Millennium.