And He will send His angels with the great sound of a trumpet, and they will gather together His elect from the four winds, from one end of heaven to the other.
Matthew 24:31 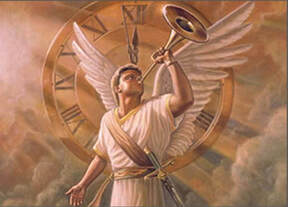 When does the “last trump” or “last trumpet” sound? Is it the “same trumpet” as the “7th trumpet” of the book of Revelation? If it is, wouldn't that mean that it has to be a post tribulation rapture since they are trumpets of judgment? Or how could a pre or mid tribulation rapture be possible if all seven trumpets have to blow first? Let's see what the Bible really says about it.

First, the verse in reference.


“In a moment, in the twinkling of an eye,” is not “how fast the rapture happens” but it is “how fast Christians' bodies in the grave and the bodies of Christians who are alive, will go from “corruption” to incorruption; as the only bodies that are “incorruptible” are fit for heaven.

We see in 1 Corinthians 15:50-58, that “the change” happens at the “last trumpet” and bodies are changed to be made fit for heaven. It sure sounds like the rapture.

The seven trumpets and results condensed: 1. Hail & fire cast to earth, mingled with blood, 1/3rd of trees/grass will burn up. 2. Something like a great burning mountain will be cast into the sea, 1/3rd of the seas will become like blood resulting in 1/3rd of all living creatures of the seas will die and 1/3rd of all ships will be destroyed. 3. Fiery star from heaven - Wormwood, will fall on the rivers and waters, 1/3rd of waters become wormwood & bitter, many die from it. 4. 1/3rd loss of daylight and nightlight; 1/3rd darkness, of sun, moon, stars are struck so that a third of them will be darkened. 5. A star that had fallen from heaven to earth, will be given the key to the bottomless pit & evil-like locusts will be let loose. They will torment all those not marked by the seal of God (the 144,000 Jews), by stinging for 5 months. People will want to die but will not be able to. 6. Four special angels will be released, who were previously bound at the Euphrates river & kill 1/3rd of mankind. They will use an army of 200 million that will emit 3 kinds of plagues; fire, smoke & brimstone, from their front and back ends. 7. Completion. The mystery of God will be finished. The kingdoms of the world will have become the kingdoms of our Lord & His Christ.

None of these 7 trumpets are the same trumpet of 1 Corinthians or the rapture. The 5th trumpet certainly reveals something interesting. By the time it sounds, the 144,000 thousand Jews will have been sealed.


The sealing of the 144,000 Jews, is something that happens while everything on earth is suspended at or about the time of the rapture. Not one outpouring of judgment or wrath will effect the 144,000 who will be sealed for protection to endure the last 3 ½ years.

So, when is this last trumpet spoken of by Paul? Does it happen at the 7th trumpet prophesied of by John in the book of Revelation? Would not the rapture be long been over-with by that time?

The answer lies in what both John and Paul wrote.

By the time John's “7th trumpet sounds” in Revelation 11:15, not only will the rapture have happened but all 6 preceding trumpets will have sounded and possibly all 7 bowls have been poured out. There is no doubt that the rapture precedes it. So we can eliminate it as being the same “trumpet” that Paul spoke of in 1 Corinthians 15:52.

Paul gave us a marvelous hope about the coming of the Lord and it has to do with “change.” Since we will be “changed at the last trump” that Paul wrote about, let consider what else he wrote.


When Jesus was resurrected, He became the first person to get an “incorruptible body.”


So we will become like Jesus when He is revealed, the firstfruit of no longer being corruptible as we have been like Adam, but made incorruptible at His coming.

So which “last trumpet” is Paul referring to?

The answer is in the Word. The “last trumpet” Paul is referencing is the same one of these verses.


So why is it called “the last trumpet” by Paul?

Because that is what it is! It will be the last call on earth for the gathering of the saints. This trumpet marks the end of the opportunity of salvation for those still on earth. This trumpet will be deliverance for the saints; but it will mark the beginning of the wrath and judgment for those who “received the mark of the beast and those who worshiped his image.” The Bible shows no one repenting or coming to God at all during the last 3 1/2 years. And those who worshiped the beast and took his mark were eternally condemned when they did it (﻿Revelation 14:9-11﻿). When Paul's "last trumpet" sounds, it will be the "last call" and it will be the end of the age, for all opportunity for salvation.
OTHER "GENERAL RAPTURE" ARTICLES
﻿ANCIENT JEWISH WEDDING CUSTOMS & JESUS CHRIST, HIS BRIDE THE CHURCH
Amazing correlation such as, only the father of the groom could say "go, call the wedding" when he felt all were prepared according to him and more.
AS A THIEF IN THE NIGHT
Understanding this idiom, its real meaning and how it correlates with other Scripture!
AS IN THE DAYS OF NOAH
What did Jesus really mean by this? It is much more than the common interpretation.
BRIDE OF CHRIST
Jesus is coming for a church pure and true. By her faithfulness, she will be counted worthy of her Lord.
CAN THE RAPTURE HAPPEN AT ANY TIME?
When all the events line up according to prophecy, the rapture will happen. So what is left that is necessary for the Word of God to be fulfilled?
EVERY EYE WILL SEE HIM
Jesus is coming for His bride. And He is not eloping. The rapture is so much bigger (and the events that surround it) than we can even know. It will be a huge event.
EVERY KNEE WILL BOW
The lost will bow to the Lord Jesus. The Father will see His Son glorified; whether they like it or not. And they will confess He is Lord.
IMPORTANT COMPONENTS TO THE BOOK OF REVELATION
An overview of some of the major components of the book of Revelation.
IMPORTANT CONSIDERATION FOR REVELATION UNDERSTANDING
A few keys are offered here that can unlock some of the doors to understanding prophetic Scripture.
IN THE TWINKLING OF AN EYE
This is about one of the most misquoted verses of all time. If you have not seen it yet, once you see the real meaning, it is amazing.
THE APOSTASY, THE GREAT FALLING AWAY
Many are looking for "the whole world to come to Christ" before the Lord returns. The opposite will happen. See it in God's Word and explained here.
THE BIGGER PICTURE, UNDERSTANDING GOD AND THE DEVIL IN THIS DAY AND HOUR
A timely commentary for living during these days.
THE LORD WILL RULE WITH A ROD OF IRON
This article explains the real meaning of the verses that make this statement.
THE OPPORTUNITY FOR SALVATION WILL END AT THE RAPTURE
Sadly many think they have their whole lives to decide to turn to God and for some it turns out to have been a foolish mistake. And so it is with the rapture.
THE TWO FINAL BATTLES BETWEEN GOD & SATAN
See it shown with Scripture, that Armageddon happens at the end of the 7 years and the battle of Gog and Magog at the end of the Millennium.
TWO WHITE HORSES, TWO VERY DIFFERENT RIDERS AND TIMES
This article shows how the first white horse that we see in the book of Revelation, is the imitation Christ. Jesus comes at Armageddon on His horse, not at the first seal.

​
E. Cockrell, © 2016, May be copied for personal study or instruction but shall not be copied and/or distributed in whole or part without permission or for financial profit.