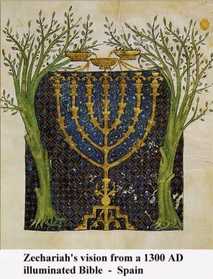 Daniel 12:4-10 "But you, Daniel, shut up the words, and seal the book until the time of the end; many shall run to and fro, and knowledge shall increase." Then I, Daniel, looked; and there stood two others, one on this riverbank and the other on that riverbank. And one said to the man clothed in linen [the Angel of the Lord], who was above the waters of the river, "How long shall the fulfillment of these wonders be?" Then I heard the man clothed in linen, who was above the waters of the river, when he held up his right hand and his left hand to heaven, and swore by Him who lives forever, that it shall be for a time, times, and half a time; and when the power of the holy people has been completely shattered, all these things shall be finished. Although I heard, I did not understand. Then I said, "My lord, what shall be the end of these things?" And he said, "Go your way, Daniel, for the words are closed up and sealed till the time of the end. Many shall be purified, made white, and refined, but the wicked shall do wickedly; and none of the wicked shall understand, but the wise shall understand.”

Matthew 24:14 “And this gospel of the kingdom will be preached in all the world as a witness to all the nations, and then the end will come.”

Matthew 24:15-31 "Therefore when you see the 'abomination of desolation,' spoken of by Daniel the prophet, standing in the holy place" (whoever reads, let him understand), then let those who are in Judea flee to the mountains. Let him who is on the housetop not go down to take anything out of his house. And let him who is in the field not go back to get his clothes. But woe to those who are pregnant and to those who are nursing babies in those days! And pray that your flight may not be in winter or on the Sabbath. For then there will be great tribulation, such as has not been since the beginning of the world until this time, no, nor ever shall be. And unless those days were shortened, no flesh would be saved; but for the elect's sake those days will be shortened. Then if anyone says to you, 'Look, here is the Christ!' or 'There!' do not believe it. For false christs and false prophets will rise and show great signs and wonders to deceive, if possible, even the elect. See, I have told you beforehand. Therefore if they say to you, 'Look, He is in the desert!' do not go out; or 'Look, He is in the inner rooms!' do not believe it. For as the lightning comes from the east and flashes to the west, so also will the coming of the Son of Man be. For wherever the carcass is, there the eagles will be gathered together. "Immediately after the tribulation of those days the sun will be darkened, and the moon will not give its light; the stars will fall from heaven, and the powers of the heavens will be shaken. Then the sign of the Son of Man will appear in heaven, and then all the tribes of the earth will mourn, and they will see the Son of Man coming on the clouds of heaven with power and great glory. And He will send His angels with a great sound of a trumpet, and they will gather together His elect from the four winds, from one end of heaven to the other.”

Mark 13:10 “And the gospel must first be preached to all the nations.”

Revelation 11:1-3 Then I was given a reed like a measuring rod. And the angel stood, saying, "Rise and measure the temple of God, the altar, and those who worship there. But leave out the court which is outside the temple, and do not measure it, for it has been given to the Gentiles. And they will tread the holy city underfoot for forty-two months.”

Revelation 11:4-8 “And I will give power to My two witnesses, and they will prophesy one thousand two hundred and sixty days, clothed in sackcloth." These are the two olive trees and the two lampstands standing before the God of the earth. And if anyone wants to harm them, fire proceeds from their mouth and devours their enemies. And if anyone wants to harm them, he must be killed in this manner. These have power to shut heaven, so that no rain falls in the days of their prophecy; and they have power over waters to turn them to blood, and to strike the earth with all plagues, as often as they desire. When they finish their testimony, the beast that ascends out of the bottomless pit will make war against them, overcome them, and kill them. And their dead bodies will lie in the street of the great city which spiritually is called Sodom and Egypt, where also our Lord was crucified.

Revelation 11:11-13 Now after the three-and-a-half days the breath of life from God entered them, and they stood on their feet, and great fear fell on those who saw them. And they heard a loud voice from heaven saying to them, "Come up here." And they ascended to heaven in a cloud, and their enemies saw them. In the same hour there was a great earthquake, and a tenth of the city fell. In the earthquake seven thousand people were killed, and the rest were afraid and gave glory to the God of heaven.

Revelation 14:6-7 Then I saw another angel flying in the midst of heaven, having the everlasting gospel to preach to those who dwell on the earth--to every nation, tribe, tongue, and people-- saying with a loud voice, "Fear God and give glory to Him, for the hour of His judgment has come; and worship Him who made heaven and earth, the sea and springs of water."​
OTHER ARTICLES ABOUT THE TWO WITNESSES

ARTICLES IN THE ANTICHRIST CATEGORY
ABOMINATION OF DESOLATION BIBLE VERSES
A compilation for thought and study.
ANTICHRIST & FALSE PROPHET BIBLE VERSES
The Bible verses about the Antichrist and false prophet gathered together for thought and meditation.
ANTICHRIST REVEALED IN THREE PROPHETIC SECTIONS OF SCRIPTURE
This article shows a prophetic thread about the same antichrist in Daniel 7, Daniel 8 and Revelation 17 and in so doing shows more of who he really was and is.
SATAN IS NOT THE ANTICHRIST
This articles shows it quickly & clearly with Scripture.
THE ANTICHRIST, HIS IDENTITY AND NAME
The Bible reveals much about the Antichrist. This article explains Revelation 17 and links it with Daniel and how the Bible reveals even his name.
THE DRAGON AND THE BEASTS WITH 7 HEADS AND 10 HORNS
It is possible that the dragon of Revelation 12, the beasts of Revelation 13 and 17, as well as the four beasts of Daniel chapter 7, are the same in some manner.
THE SCARLET BEAST AND THE MYSTERY, BABYLON THE GREAT, THE MOTHER OF HARLOTS AND OF THE ABOMINATIONS OF THE EARTH
Scripture with commentary showing much about who the beast is and its relationship with Babylon, the harlot, as well as, who she really is.
THE SECOND BEAST: THE FALSE PROPHET
This article takes a serious look at the identity and works of the second beast, the false prophet, according to Scripture.
THE TWO FINAL BATTLES BETWEEN GOD & SATAN
See the biblical truth that Armageddon happens at the end of the 7 years and the battle of Gog and Magog at the end of the Millennium.
TWO WHITE HORSES, TWO VERY DIFFERENT RIDERS AND TIMES
The first white horse that we see in the book of Revelation, is not the real Christ, but the imitation Christ. See the difference as in the Bible here.
WHAT IS THE ABOMINATION OF DESOLATION?
This is a clear and definitive look at what the Bible says about it.
WHO IS ABLE TO MAKE WAR WITH THE ONE WHO HAD THE DEADLY WOUND AND STILL LIVED?
Taking a closer look at the deceiver, the first beast who will deceive the world.
WHO IS THE ANTICHRIST, THE SON OF PERDITION?
This shows how the Antichrist is both a false Messiah and against Jesus Christ at the same time, according to the Bible.
WILL THE NEW JEWISH MESSIAH BE THE ANTICHRIST OF THE CHRISTIANS?
Understanding how it is possible and the reality of it.