IN THE TWINKLING OF AN EYE

The real meaning of one of the most misquoted verses of all time.​ 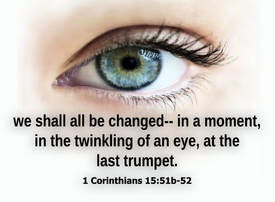 Let's look at the verses that precede and follow our key verses:


This whole section of scripture is about “how we shall become like the Lord.” These verses explain how "corruption" is not fit for heaven and how the flesh and blood bodies that we now have, are mortal and of corruption. Both the bodies of the saints in heaven and those who are still alive, must be made "fit for heaven." The term, "in the twinkling of an eye" is used to describe the speed of the changing of the bodies and remains from corruptible to incorruptible and, not about the speed of the rapture at all!

Paul also shares with us in 1 Thessalonians, some other very important information about our “gathering together” unto the Lord.


Those who "died in Christ" will return with Him. “They” are not in the grave - only “their bodies” are. "Those who sleep in Jesus" is another commonly misunderstood term. When we die, only our bodies die. Our spirits go to be with the Lord (John 11:26, 2 Corinthians 5:8).


This is also confirmed by what Jesus said.


As for how long the rapture takes, just “the trumpet blast alone” will take longer than “the twinkling of an eye.” And before the Lord enters this dimension or atmosphere, we know the sky will roll back like a scroll and an earthquake will happen as it says in Revelation 6:14 ~ and all this will take more than a blink or a twinkling of an eye!

In the following situation, a famous preacher is continuously promoting falsehood. And because he is famous, people sadly believe him.

For example, on March 10, 2015, I heard a famous preacher from San Antonio, Texas, say that it is impossible for the saints not to be taken out at any other time than the beginning of the 7 years and he was emphatic that the saints would not have to see the Antichrist. He said the rapture happens in Revelation 4:1 when a voice from heaven said to John “Come up here” - He then further said that, “everything, all events that happen after that in the entire book of Revelation” are “post-rapture.” This is so not true. The seven seals of Revelation 6, correlate with Matthew 24, Luke 21 and Mark 13. The apostle John in Revelation chapter 4, was being shown heaven, so He could be shown (and relate to us) about the Scroll, the Lamb and Lion and the opening of the seven seals, and his experience absolutely was not secretly showing John's visit as being the rapture for us and then everything in the book of Revelation after that is post-rapture!

This preacher not only promotes improper timing, but also claims the rapture can happen at any minute and will be invisible (both of which, false concepts are dispelled with God's Word in the articles, Can The Rapture Really Happen Today? and Every Eye Will See Him). It is time for us to know the truth of God's Word for ourselves and filter out errant teachings! The idea that the church is raptured up in chapter 4 of the book of Revelation is totally unscriptural. All one has to do is keep reading the rest of the book of Revelation with open eyes and this falsehood crumbles.

Consider the 7 seals which start in Revelation, chapter 6...

The rapture happens at the 6th and 7th seals. (which takes a lot longer than any twinkling of an eye- please read it... Revelation 6:12-17,8:1) The 7th seal being Revelation 8:1 where there is silence in heaven for about an half hour. And even the 5th seal (Revelation 6:9-11), where the martyred saints cry out “how much longer O Lord” and John writes and I paraphrase, “not yet until the correct number of saints are martyred.” Once again, I repeat, the rapture, is the 6th and 7th seals! So how could this famous preacher and others like him be right? They aren't, they are absolutely wrong.

Not only all this, but the 144,000 Jews, 12,000 from each tribe, “have to be sealed;” read all of Revelation 7 and you can see “them sealed” and “followed by the gathering of the saints” arriving in heaven... whereupon an Elder says to John in Revelation 7:14: "So he said to me, "These are the ones who come out of the great tribulation, and washed their robes and made them white in the blood of the Lamb.” How can this be in Revelation chapter 7, if the rapture happened in Revelation chapter 4 and as this "famous preacher" (and others) claim that the book of Revelation is in chronological order? Not only would that be impossible but the book of Revelation is not meant to be read as if it is simply chronological. It has been written to be "revealed by the Holy Spirit" an﻿d "repeats itself" and even has "interruptions" that a person has to see in order to get the full picture (see the article, The Holy Interruption). God did not make it easy to see on purpose. And He reveals it, just like all truth, according to where we are at the time and what we are able to receive!
​
There are events that must happen before the rapture and at the rapture. It is amazing that people want to escape the idea of having to go through a time of tribulation so much, that they refuse to believe what the Bible says in black and white. In the following verses, it is quite clear that before our "gathering together" to the Lord, that two critical things must happen.


According the the verses above, Christians will live through a time of apostasy (great falling away) and live to see the Antichrist be in power and declare himself like God and demand all take the mark of the beast and since he will "sit as God in the temple of God."

In conclusion, the truth is what the Bible says. Our God is a God of order. All Scripture will be fulfilled. And according to the Bible, there are events that lead to the rapture and also at the rapture. Our bodies will be changed from corruptible to incorruptible, in the twinkling of an eye, just as the Scripture says. We can easily see that the rapture itself involves more than just the changing of bodies and will take longer than a twinkle or even a blink.

There has to be time for a huge earthquake, the whole atmosphere will go dark by the sun going dark, the moon turning blood-red and stars falling from the sky. Then the sky will have to have time to “roll back like a scroll,” there has to be a heavenly trumpet blast and the shout of an archangel, time for the graves of the saints to open on the whole earth and give up the remains of them, those alive rising to meet the Lord and the saints in the air - both putting on incorruptible for corruptible (changing to the heavenly state) and with every eye will seeing Him, even the evil ones and ones even in hell will see Him (Revelation 1:7), and long enough for the 144,000 to be sealed (protected from the wrath to come). And even more. But this alone is enough to make the point!

ANCIENT JEWISH WEDDING CUSTOMS & JESUS CHRIST, HIS BRIDE THE CHURCH
Amazing correlations such as, only the father of the groom could say "call the wedding" when he felt all were prepared according to him and more. Shows a distinct correlation ancient Jewish wedding customs with the rapture.
AS A THIEF IN THE NIGHT
Understanding this idiom, its real meaning and how it correlates with other Scripture!
AS IN THE DAYS OF NOAH
What did Jesus really mean by this? It is much more than the common interpretation.
CAN THE RAPTURE HAPPEN AT ANY TIME?
What prophecies still need to be fulfilled before the rapture can happen?
EVERY EYE WILL SEE HIM
Jesus is coming for His bride. And He is not eloping. The rapture is so much bigger (and the events that surround it) than we can even know. It will be visible and a huge event.
EVERY KNEE WILL BOW
The lost will bow to the Lord Jesus. The Father will see His Son glorified; whether they like it or not. And they will confess that Jesus is Lord.
IMPORTANT COMPONENTS TO THE BOOK OF REVELATION
An overview of some of the major components of the book of Revelation.
IMPORTANT CONSIDERATION FOR REVELATION UNDERSTANDING
A few keys are offered here that can unlock some of the doors to understanding prophetic Scripture.
THE APOSTASY, THE GREAT FALLING AWAY
Many are looking for "the whole world to come to Christ" before the Lord returns. The opposite will happen. See it in God's Word and explained here.
THE BIGGER PICTURE, UNDERSTANDING GOD AND THE DEVIL IN THIS DAY & HOUR
A timely commentary for living during these days.
THE LAST TRUMPET
There are many trumpets in the Bible. There are 7 special ones foretold of by John the Revelator. But which one happens at the rapture?
THE LORD WILL RULE WITH A ROD OF IRON
This article explains the real meaning of the verses that make this statement.
THE OPPORTUNITY FOR SALVATION WILL END AT THE RAPTURE
Sadly many think they have their whole lives to decide to turn to God and for some it turns out to have been a foolish mistake. And so it is with the rapture.
THE TWO FINAL BATTLES BETWEEN GOD & SATAN
See it shown with Scripture, that Armageddon happens at the end of the 7 years and the battle of Gog and Magog at the end of the Millennium.
TWO WHITE HORSES, TWO VERY DIFFERENT RIDERS AND TIMES
The Antichrist is the allegorical rider of the white horse at first seal. Jesus Christ is the rider of the white horse at Armageddon.

IS THE WORD "RAPTURE" IN THE BIBLE?
Understanding "harpázō" and the Bible verses ​where it is used.
THE BEST BIBLICAL MINDSET FOR LIVING IN THE LAST DAYS
As Paul showed the Thessalonian church, there is a biblical mindset to have regarding living in the last days.
THE MYSTERY OF DANIEL'S SEVENTY WEEKS OF YEARS
There is "one week of years" left on the "prophetic clock." This "last seven years" (sometimes called the tribulation) was foretold of in the book of Daniel.
THE TRIBULATION AND THE WRATH OF GOD
Understanding that mid tribulation rapture is pre-God's wrath. Taking a closer look at what "wrath and tribulation" really mean and what really happens during the last 7 years of this age.
TRIBULATION AND WRATH, BIBLICAL DEFINITIONS AND USAGE
Understanding the biblical usage of these words in their original context.
UNDERSTANDING THE RAPTURE AND VARIOUS VIEWS ABOUT IT
Pre, mid and post tribulation definitions, understanding the millennial views, preterism and more.
WHAT IS THE RAPTURE?
A scriptural introduction to understanding the rapture concept.