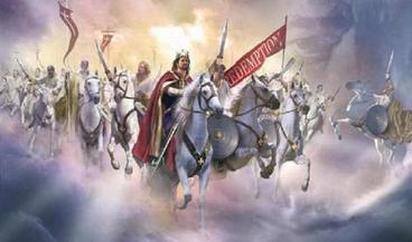 There are two super significant battles that will happen in the future. One happens at the end of this age and the other at the end of the Millennium. There is so much rhetoric and falsehood on this subject, that it is very important to know the truth of what the Bible says in order to avoid being deceived into false concepts.

First of the two final battles, will happen at Armageddon.

Many people say that "Armageddon" can happen at any time and can even be brought on by warring nations. That concept is not biblical. The Battle of Armageddon is about Satan, rallying his demonic forces with human forces against God and His forces. Whereupon Jesus will come from heaven on His white horse with the armies of heaven and conquer and subdue them in short order.

The Battle of Armageddon ends with the Antichrist & false prophet being captured and thrown into the lake of fire and Satan being cast and bound in a pit. It also completes with the final demise of the wicked known as the grapes of wrath in the winepress of God.

The last battle of all time, will happen after the Millennium.

A special time of Millennial reign of Christ on a redeemed earth will follow. After this 1000 year time period, Satan will be loosed for one last time. This will close with one last battle of all time; ending with Satan losing again and being cast into the lake of fire, for ever. Hallelujah, Amen.


﻿So this battle is at the end of the last seven years of this age; the beast and the false prophet are cast alive into the lake of fire and Satan is bound in the bottomless pit for a 1000 years. Note: the beast and false prophet meet their demise at this time, not at the rapture.

There are 1000 years set aside by God since the beginning. In a way, it is a Sabbath millennium, following 6000 years of God working with mankind. This will be a millennium of peace and no devil or demons running about the earth. It will be similar to the Garden of Eden, but with no devil popping in until its completion.

After the 1000 years of peace have passed, Satan will be turned loose so that those who lived and were born during this time, can be tried and tested. No one gets to heaven permanently without two things: One, Jesus is the only way in and two, all have to be tested. This is just the way it is. And after Satan is loosed and done his bidding, he will make his last effort of all time, to attempt to usurp God once more.


﻿Satan will be thrown into the lake of fire and brimstone for the rest of eternity. He will join the beast and false prophet who will already be there.

Also happening at this time, will be the Great White Throne of Judgment (Revelation 20:11-15) and the departure of the old heavens (the physical ones, our solar system, etc. - not the place of God's throne and the saints) and old earth by fire (2 Peter 3:10-12).

And Father God will have what He longed for in His heart.

﻿Revelation 21:1-3 Now I saw a new heaven and a new earth, for the first heaven and the first earth had passed away. Also there was no more sea. Then I, John, saw the holy city, New Jerusalem, coming down out of heaven from God, prepared as a bride adorned for her husband. And I heard a loud voice from heaven saying, "Behold, the tabernacle of God is with men, and He will dwell with them, and they shall be His people. God Himself will be with them and be their God."
OTHER "GENERAL RAPTURE" ARTICLES

﻿ANCIENT JEWISH WEDDING CUSTOMS & JESUS CHRIST, HIS BRIDE THE CHURCH
Amazing correlation such as, only the father of the groom could say "go, call the wedding" when he felt all were prepared according to him and more.
AS A THIEF IN THE NIGHT
Understanding this idiom, its real meaning and how it correlates with other Scripture!
AS IN THE DAYS OF NOAH
What did Jesus really mean by this? It is much more than the common interpretation.
BRIDE OF CHRIST
Jesus is coming for a church pure and true. By her faithfulness, she will be counted worthy of her Lord.
CAN THE RAPTURE HAPPEN AT ANY TIME?
When all the events line up according to prophecy, the rapture will happen. So what is left that is necessary for the Word of God to be fulfilled?
EVERY EYE WILL SEE HIM
Jesus is coming for His bride. And He is not eloping. The rapture is so much bigger (and the events that surround it) than we can even know. It will be a huge event.
EVERY KNEE WILL BOW
The lost will bow to the Lord Jesus. The Father will see His Son glorified; whether they like it or not. And they will confess He is Lord.
IMPORTANT COMPONENTS TO THE BOOK OF REVELATION
An overview of some of the major components of the book of Revelation.
IMPORTANT CONSIDERATION FOR REVELATION UNDERSTANDING
A few keys are offered here that can unlock some of the doors to understanding prophetic Scripture.
IN THE TWINKLING OF AN EYE
This is about one of the most misquoted verses of all time. If you have not seen it yet, once you see the real meaning, it is amazing.
THE APOSTASY, THE GREAT FALLING AWAY
Many are looking for "the whole world to come to Christ" before the Lord returns. The opposite will happen. See it in God's Word and explained here.
THE BIGGER PICTURE, UNDERSTANDING GOD AND THE DEVIL IN THIS DAY AND HOUR
A timely commentary for living during these days.
THE LAST TRUMPET
There are many trumpets in ​the Bible. There are 7 special ones foretold of by John the Revelator. But which one happens at the rapture?
THE LORD WILL RULE WITH A ROD OF IRON
This article explains the real meaning of the verses that make this statement.
THE OPPORTUNITY FOR SALVATION WILL END AT THE RAPTURE
Sadly many think they have their whole lives to decide to turn to God and for some it turns out to have been a foolish mistake. And so it is with the rapture.
TWO WHITE HORSES, TWO VERY DIFFERENT RIDERS AND TIMES
This article shows how the first white horse that we see in the book of Revelation, is the imitation Christ. Jesus comes at Armageddon on His horse, not at the first seal.