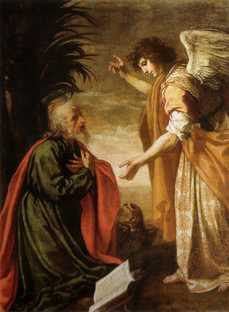 The apostle John in experiencing and recording all the events of the book of Revelation had such an incredible time. Sometimes things happened incredibly fast. This article is about how John envisioned the seven trumpets and then went to record them. As he was doing so, he experienced what is known as a “holy interruption.” He literally stopped what he was doing and went the direction the new angel was taking him and when finished; John went back to what he was doing. Once you see this interruption, the verses involved will start to make more sense.

John just finished recording the events he saw with the opening of the seven seals. Then his attention turned to 7 angels with 7 trumpets. John watched and then recorded the events that correlated to the angels with the seven trumpets.

The events of trumpets 1- 4 were described in short. But before the 5th trumpet would sound, another angel appeared with the announcement that there were “three woes” coming.


Therefore trumpets “5, 6 and 7” are additionally called “the three woes.”

This was further confirmed when John finished describing the events of the 5th trumpet, as he concluded with “One woe is past. Behold, still two more woes are coming after these things.”

Then John described the events of the 6th trumpet, and as he was about to conclude (at Revelation 9:21) and say “the second woe past”... he had a very “holy and incredible interruption” by the Angel of the Lord himself. John would not get to make that “concluding statement” until some time later.

As Chapter 10 opens, we see John gets a visit from the Angel of the Lord.

John will not be able to finish writing the conclusion of the 6th trumpet/ 2nd woe until “all that is involved with the holy interruption” is finished.

This Angel of the Lord declares in Revelation10:6-7, “that there should be delay no longer, but in the days of the sounding of the seventh angel, when he is about to sound, the mystery of God would be finished, as He declared to His servants the prophets.”

This “Angel” said that the 7th trumpet will be very final in that “the mystery of God would be finished as prophesied.”

And then the voice from heaven commanded John to eat a little scroll to be given to him by the Angel. Which he did. It was sweet in his mouth and bitter in his stomach.

The interruption continued from eating the little scroll "to being commanded to prophesy."


Which John did, starting in Chapter 11 verse 1 and did not stop until the end of verse 13. At which point the “holy interruption” was over.

It was like he was sitting at a desk or whatever they had back then, writing about the seven trumpets and the Lord said at the end of the 6th trumpet, “Wait” - we have something important you must stop and do. And when done, John, no doubt in a holy daze... concluded the prophesying and then picked up, right where he left off in Chapter 9, at the end of the 6th trumpet (2nd woe) and he finally gets to write Revelation 11:14, “The second woe is past. Behold, the third woe is coming quickly.”

To recap, from the end of chapter 9 until chapter 11, verse 14 is all “holy interruption.”

The 3rd woe, 7th trumpet; he said is coming quickly.


Do you remember in Revelation 10:7, when the Angel of the Lord told John, “in the days of the sounding of the seventh angel, when he is about to sound, the mystery of God would be finished”?

It came quick for John to see and record, but it will not be so quick in worldly time! The 7th trumpet, 3rd woe is the Great White Throne of Judgment” - which does not take place until after the Millennium.

John was in effect recording the trumpets of judgment when the Lord took Him to something else important. Then he comes back to where he left off and starts again.

How do we know the 7th trumpet, 3rd woe is the final judgment?

For one thing, notice the word “judgment” - and of the wicked. I am not sure how many people realize it, but “Judgment Day” as many call it, is not for the saved. The sheep of God will already by then, have had the “Marriage Supper of the Lamb and Armageddon will be long over with. The Millennium will be over and it will be time for the judgment of the dead, not the dead in Christ or asleep in Christ, but time of the judgment of the lost, at the great white throne of judgment.

Please notice in this next section of Scripture, that the judgment is for the dead and the timing of their destruction.


More confirmation of the final judgment of the lost is found here.


The very next thing John wrote was: Revelation 21:1 “Now I saw a new heaven and a new earth, for the first heaven and the first earth had passed away.”

When are the old earth and old heavens (not “heaven” where the Lord is) but the “physical heavens” as in solar systems/universe are going to pass away...

Peter told us about it in:


If we are to understand the book of Revelation, we must understand that it is not necessarily in an "easy to see" order. Did John record that he was writing in chronological order? No, he certainly did not! For some reason people want to believe it though and it is not that simple. Some people (especially pre tribulationists) place "the rapture in chapter 4" when John visited heaven and then declare that everything written after that is post rapture. And that simply is not true. For one thing, it was only a visit to heaven, not the rapture, and for the other, there are many verses regarding the rapture and what leads up to it (the seven seals of chapter 6 and chapter 8) after that. The way the apostle John writes, he records some about an event, and then later, after recording about other events, he records more about previous events. For example, the Bible verses regarding the battle of Armageddon, are recorded in Revelation 16:16, Revelation 17:14, Revelation 19:11-21 and involve Revelation 14:17-20. The Bible verses regarding the seven trumpets, start in the last part of Revelation 8, are in all of Revelation 9, mentioned in one verse of chapter 10, Revelation 10:7 and the last part is in Revelation 11, Revelation 11:15 with much in between, including John stopping to encounter an angel, hear the seven thunders that he was told to seal up and not write about them, eat a scroll, prophesy about the Two Witnesses, a bit more and then finally at the end of chapter 11, he finishes recording the 7th trumpet. The book of Revelation is not simple. To get the full picture, one has to read about the same event at the different places John records about it.

Something similar happens to people with the book of Daniel. If one realizes that the first part of Daniel is his life history and the latter part is Daniel recording his own prophetic visions and angelic encounters that he had, then it starts to make sense.

We must look at these prophetic books with open hearts and minds under the direction of the Holy Spirit to comprehend whatever the Lord has for us. And we can all benefit from the insight received. Praise the Lord for the many people that God revealed this “holy interruption to” as it comes as confirmation to this writer.

THE SEVEN TRUMPETS AND THREE WOES
The 7 trumpets are shown with light commentary & how the last 3 trumpets are also the 3 woes.

OTHER ARTICLES ABOUT THE "SEVENS" OF THE BOOK OF REVELATION

BIBLE VERSES OF ALL THE "SEVENS" OF THE BOOK OF REVELATION
Listed for the person wondering how many "sevens" there are in the book of Revelation.
﻿SEVEN TRUMPETS, SEVEN BOWLS PARALLEL STUDY
A side by side view of the 7 trumpets and 7 bowls for the person seriously studying the book of Revelation.
THE SEVEN BOWLS OF GOD'S WRATH
The seven bowls, also called vials, of God's wrath listed and with light commentary.
THE SEVEN SEALS OF REVELATION
The seven seals listed with commentary showing corresponding Scripture & a chart.

ANCIENT JEWISH WEDDING CUSTOMS & JESUS CHRIST, HIS BRIDE THE CHURCH
Amazing correlations such as, only the Father of the groom could say "call the wedding" when he felt all were prepared according to him and more. Shows a distinct correlation ancient Jewish wedding customs with the rapture.
AS A THIEF IN THE NIGHT
Understanding this idiom, its real meaning and how it correlates with other Scripture!
AS IN THE DAYS OF NOAH
What did Jesus really mean by this? It is much more than the common interpretation.
CAN THE RAPTURE HAPPEN AT ANY TIME?
What prophecies still need to be fulfilled before the rapture can happen?
EVERY EYE WILL SEE HIM
Jesus is coming for His bride. And He is not eloping. The rapture is so much bigger (and the events that surround it) than we can even know. It will be visible and a huge event.
EVERY KNEE WILL BOW
The lost will bow to the Lord Jesus. The Father will see His Son glorified; whether they like it or not. And they will confess that Jesus is Lord.
IMPORTANT COMPONENTS TO THE BOOK OF REVELATION
An overview of some of the major components of the book of Revelation.
IMPORTANT CONSIDERATION FOR REVELATION UNDERSTANDING
A few keys are offered here that can unlock some of the doors to understanding prophetic Scripture.
IN THE TWINKLING OF AN EYE
This is about one of the most misquoted verses of all time. If you have not seen it yet, once you see the real meaning, it is amazing.
THE BIGGER PICTURE, UNDERSTANDING GOD AND THE DEVIL IN THIS DAY & HOUR
A timely commentary for living during these days.
THE LAST TRUMPET
There are many trumpets in the Bible. There are 7 special ones foretold of by John the Revelator. But which one happens at the rapture?
THE LORD WILL RULE WITH A ROD OF IRON
This article explains the real meaning of the verses that make this statement.
THE OPPORTUNITY FOR SALVATION WILL END AT THE RAPTURE
Sadly many think they have their whole lives to decide to turn to God and for some it turns out to have been a foolish mistake. And so it is with the rapture.
THE TWO FINAL BATTLES BETWEEN GOD & SATAN
See it shown with Scripture that Armageddon happens at the end of the 7 years and the battle of Gog and Magog at the end of the Millennium.
TWO WHITE HORSES, TWO VERY DIFFERENT RIDERS AND TIMES
The Antichrist is the allegorical rider of the white horse at first seal. Jesus Christ is the rider of the white horse at Armageddon.

​
E. Cockrell, © 2014, May be copied for personal study or instruction but shall not be copied and/or distributed in whole or part without permission or for financial profit.